This survey drops back to the colonization period. To set the stage, I need to begin with Christopher Columbus' voyages and the new world's discovery.

Religion is extremely important in the new world's history. Many colonies began as a result of a search for free religious expression. Quite often this merely meant the freedom to experiment with new and varied religious and political structures. Colonization also resulted from intense Protestant competition with Catholicism. All nine New England colonies began for religious reasons as were colonies in Pennsylvania and Maryland. You need to realize, however, that none of this means the Americas were settled only for religious reasons. Most colonists came to seek opportunity and advancement.

I. Christopher Columbus and "Orbis Terrarum"

When Columbus sailed, most of Europe's educated people believed the earth was round. The Greeks originally calculated the planet's size although Columbus believed the sphere was much smaller than they suggested.

Educated men believed in the concept of "orbis terrarum." Orbis terrarum simply stated that water comprised most of the globe with small land masses spread around it. The era's maps showed Europe, part of Africa, Asia and the Middle East with the rest water. Cartographers usually portrayed regions outside Europe much smaller, much like a Texas postcard shows a huge Texas with very small states comprising the lower 48 states. Humanity, these men thought, lived on a limited segment of the world. People speculated about races outside the world's known areas, but the Roman church squelched these speculations because it believed it had reached the whole world with the Gospel.

Folklore said a fabulous land and people existed somewhere west of Europe. Some of these tales resembled romantic stories told of Atlantis. The stories created lands populated by creatures which were extra-human or supra-human. Some thought heaven existed in the uncharted oceans west of the European continent. They thought innocents and the righteous dead populated "heaven". Others imagined a land of monsters "out there" in those uncharted seas. One popular story from the period suggested a land of plant people (women, of course) who devoured sailors like a venus fly trap eats flies.

Columbus accepted the popular view that only water separated Europe from Asia. He rejected ideas of a land mass between the two continents. He knew something of Africa and Marco Polo's travels. Therefore, he knew China's coastline runs north and south and lies, at best estimate, almost directly west of Spain.

Without ships and sailors, though, Columbus could not test his theories. But to equip ships and recruit sailors, Columbus needed money. He began appealing to Spain beginning in the 1480s but it took three years before his requests came to Queen Isabella's attention. Columbus planned to seek help from Henry VIII if Isabella did not respond. Isabella, of course, approved funds hoping Columbus might discover a shorter route to India and make trade expansion possible. In the back of her mind, she dreamed discovering new lands which Spain could colonize. She also dreamed of opening new areas for missionary work.

Columbus kept his first voyage strictly secular. No clergy accompanied the three ships and the crew observed no sacraments although they held daily vesper services. Columbus first landed on "San Salvador" (actually Watling Island). Still thinking in terms of orbis terrarum, Columbus figured he reached the southern part of Japan. When he returned to Spain and described the natives in terms of the day's popular mythologies.

Spain reluctantly allowed Columbus a second voyage even though he discovered no wealth or spices. On his second voyage he hit Cuba. Cuba sits east and west rather than north and south like China. Columbus thought he had landed on the Malay Peninsula. On a third journey he hit Venezuela. By then he realized he could no longer explain his experiences by orbis terrarum. The era's scientific community and the church both specifically stated that no land mass existed between Europe and Asia. Columbus tried to fit all this into his world view and concluded he has come into contact with the Garden of Eden. So, in this three voyages Columbus landed in Japan, Malaysia, and the Garden of Eden.

Subsequent explorations fared little better. Amerigo Vespucci sailed on an exploratory voyage as a navigator. Vespucci thought Columbus could not navigate his way out of a paper bag. Vespucci's ship hit Brazil and left him totally confused. He first stated there is another continent but reversed himself when other's reminded him this is heresy. Spain allowed Columbus one more trip. This last time out, Columbus headed south of "Japan" and north of the "Garden of Eden" and landed on the Isthmus of Panama. Totally confused and bewildered Columbus threw up his hands and gave up. Finally, Peter Martyr, a German monk, suggested another continent really does rest between Europe and Asia. The theory is published in 1507. In one sense, Peter Martyr discovered America.

Why do I tell you all this? The significance is that the Europe's educated see America in the light of their own values, scientific knowledge, and religious faith. They did not see the discovery on its own terms. When Europeans met Indians they remembered the old stories and treated them either as innocents and angels or demons. Europeans saw no middle ground--those Indians can not be fully human. Significantly, Thomas More set his Utopia on an island in the Caribbean. He suggested that you can attain perfection in the new world. Cortez complicated the picture for Europe when he arrived. He returned to Spain with reports of fabulous wealth. John Cabot told about reports of a crystal mountain in the new world. Europeans did not know what to believe. Why not a fountain of youth? Presuppositions fly out the window and the new world challenged every conception of the ordinary.

Spain was first in attempting American settlements. They settled in the south, specifically Mexico and South America. As a result, they had little impact on North American development.

Let me start this survey with France. French settlers established a colony at Guanabara Bay, now Rio de Janeiro, in 1555. These are Huguenots led by Villigagnon. French Huguenots saw this settlement as an "escape valve" which offered safety outside France. Internal strife continually weakened the colony and the Portuguese eventually conquered it.

The French tried a second effort when they established Fort Caroline on the St. John River in Florida, modern Jacksonville. Huguenots again established this colony moving south from South Carolina in 1564. The Spanish claimed Florida and had attempted settlement there although none lasted to that point. When the French settled Fort Caroline the Spanish realized these Frenchmen were dangerously close to their shipping lanes. The Spanish then colonized St. Augustine. From that strategic point the Spanish sent soldiers who wiped out most of the French.

A third French effort established St. Croix, located in what is now New England. This colony, too, proved unsuccessful.

The French finally build a successful colony at Quebec in 1608. Champlain called for the Catholic Recollets, a monastic order, and gave them sole responsibility for converting Canada once the settlement had permanency. Once the Recollets realized the enormity of that task they called in the Jesuits for help. From that point on the Jesuits worked diligently in Canada. From time to time Indians martyred some of these missionaries and they mistreated many more before freeing them.

The French found themselves involved in a number of colonial wars during the colonial period. They faced continuing friction with the French and later with the English. Religious factors played an important part in four of these wars. In North America both sides had their Indian allies. One writer said:

In Maine, the English captured a group of Indians and they discovered the Jesuits had taught them Mary was a Frenchwoman and Jesus was killed by Englishmen. It was the duty of Indians to kill those who killed Christ.

English colonial efforts began slowly. The English planted colonies as early as 1580, but they failed. In England, the "King's Business" hampered concentration on colonization. Henry VIII showed far more concern over English claims in France than new world colonization. After his death the struggle between Catholics and Protestants kept colonial efforts hamstrung until the Elizabethan Settlement.

You simply can not separate anti-French and anti-Spanish sentiment from England's overwhelming anti-Catholicism. Englishmen dreamed of duplicating Spanish successes in locating and returning new world wealth to Europe. In addition, many others saw the new world as an opportunity for experimentation, experimentation they thought would improve England both economically and politically.

The Jamestown fiasco demonstrated English efforts best. The Jamestown settlement followed the pattern of Plantation used in Ireland. Plantation means "settlement under pressure." The English practice required them to drive off natives or bring them into the work force even if it meant force. The English saw the area's Indians like English landlords in Ireland saw the Irish. So, the English settled Jamestown as an experimental station. They expected the settlement to quickly produce tremendous wealth. The skills seen in the Jamestown settlers prove the thesis. The community numbered only 500 young men. None of the settlers were farmers or stockmen so the they found themselves dependent on the Indians. Glassblowers, ironworkers and farmers specializing in cash crops made up the largest contingent. At first no one planned to stay in Jamestown. Many expected to find gold nuggets lying on top of the ground.

Jamestown appeared to be a typical English village. Even though there was plentiful land, these colonists huddled together in a small area just like they did in England where land was a premium. Health problems came with the crowding. In addition, the settlers built their town near a malarial swamp on the James River. They suffered from typhoid and salt poisoning from their water supply. They also selected an area inhabited by one of the strongest Indian confederations. Four hundred and forty of the first 500 colonists died within nine months. Insufficient food and failure to locate wealth led many to want to return home but English law required them to remain. The settlers also insisted on living like Englishmen including working by the Conservation of Labor standard.

Conservation of Labor arose because of England's overpopulation and lack of work. Men might work only a few hours a day or a week and then be off allowing others to work. In Jamestown, Captain John Smith forced the settlers to work but he utilized the Conservation of Labor. Each man worked four hours a day at their skill. Artisans did not farm so they still did not solve their food problem.

Jamestown became successful because they discovered a stable agricultural cash crop. In 1618-1619, tobacco experiments worked and tobacco became a rich source of income. Tobacco reaped huge profits because in its day it was an evil much like today's Marijuana. In 1618 the Virginia company established the headright system which granted 50 acres to anyone who would farm it. Now the colonists had a stake in Virginia's success. As tobacco became more and more important it created a need for a labor force. The English did not want slaves in the new world. They did want to move large segments of their own population from overcrowded England to America. So they create the indenture system. 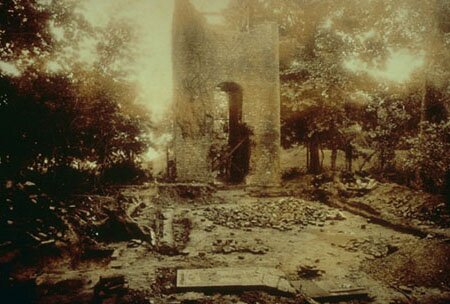 Virginia did not stabilize until the late 1660s and early 1670s. The death rate remained high because of Indian conflicts, malnutrition and internal strife. Until 1635, the settlers built few permanent houses because they did not plan to stay. This changed around 1640. Women arrived and the colonists established families and Virginia began moving towards stability. (The photo shows the remains of the Jamestown Church prior to restoration.)

Samuel Purchase, a man of the period says, "Isn't it interesting that the new world was discovered about the time the Protestant Reformation began." Purchase thought God kept America hidden until Protestants could convert it. Englishmen owed it to God to do what He laid out for them to do. Manifest Destiny may well begin here!